Some of us have that extra fat that seems to stick around longer than we’d like. Dieting and healthy eating hasn’t worked, nor has exercising. For some body types, traditional methods seem down right impossible. But thanks to technology, those traditional ways aren’t the only option when it comes to fat reduction.

However, there are many routes you could take, such as liposuction, and fat freezing. The two are very different from the other, and if you are planning of losing weight with one of the two ways, you should know the facts to understand what is better for you and your body. Below is a small guide to help you decide which alternative method is right for you. Liposuction, or as many call it lipo, is a form of fat removal that is widely used in plastic surgery. It is an evasive surgery that can be used on the abdomens, thighs, neck, chin, buttocks, arms, calves, and back, breaking up and ‘sucking’ the fat from the body. And although it sounds like a great method to once and for all do away with the fat in those problem areas, it is an operation nonetheless.

Liposuction is merely a cosmetic procedure, not a weight loss tool, as evidence shows no support on the effect on weight beyond a couple months, and does not affect obesity related problems. The aim is completely esthetic, and suits those who wish to change and enhance the contour of their body as well as problem areas, with no effect on cellulite, dimples, or stretch marks. With any surgery comes the risk of scarring and infection, and with lipo, another big risk of the fat cell growing bigger. Although they say liposuction permanently removes the fat cells, if you do not lead a healthy lifestyle after the operation, this can happen. For a procedure so complex and invasive, it is a scary thought that the fat cells could grow back larger, reversing the surgery.

There are some benefits to liposuction such as getting rid of excess skin from extreme weight loss after obesity, and some medical benefits such as lymphedema, gynecomastia, and lipomas, among others. It can also boost your confidence that you lost when those problem areas wouldn’t disappear. However, having to go under the knife and running the risks of scarring, severe bruising, infections, inflammation, as well as internal organ punctures skin burns, kidney and heart problems, and even death, although rare, can be risks you’re not willing to take. 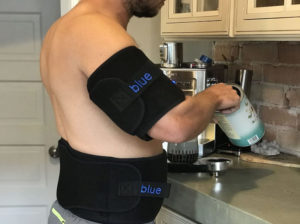 Fat freezing is an FDA approved, non surgical treatment, ridding body fat from areas we aren’t happy with. By freezing fat cells with controlled cooling and repeatedly exposing the cells to specific temperatures, a process known as fat cell death occurs, which is a release of inflammatory molecules around the treatment area.

Over the course of using your at-home fat freezing kits, your body then naturally processes the dead cells, transports them through the lymphatic system, and eliminates them, causing fat to naturally pass through your body. Unlike liposuction, fat freezing destroys the cells at their core, resulting in visible fat loss as well as a reduction of cellulite.

Because fat tissue is more vulnerable to cold temperatures than other tissues, the fat cells are destroyed while reducing damage to the surrounding skin, nerves, vessels, and muscles, unlike lipo that damages all surrounding tissue due to the fact that you are being cut open. It’s a great option if you don’t want to run the risk of scarring or being bed ridden as fat freezing allows you to go about your day after every session. Systems like blue At-Home Fat Freezing Kits don’t just give amazing results, but are extremely easy to use and have little to no side effects. All you do is freeze the wraps over night, slip the wrap around your problem area, and wear for an hour a day, everyday for ten weeks. It’s that simple! They are extremely affordable and safe to use, whereas the only side effects might be slight numbing and redness around the site, but which disappears once the wraps are taken off. It’s a hard technology to beat.

Neither fat freezing or liposuction solves the problem of obesity, both procedures are for problem areas that are hard to get rid of. But when it comes down to safety and effectiveness, fat freezing has lipo beat by a mile!